I deliver the goods – Cecilia Dapaah 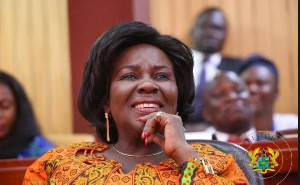 The Minister of Sanitation and Water Resources, Cecilia Abena Dapaah, has said she was recently able to negotiate some $100 million for wastewater treatment in Ghana, something she considers an achievement that proves how hardworking she is contrary to a recent rating of her ministry as the worst-performing one.

A ministerial performance tracking report by the Alliance for Social Equity and Public Accountability (ASEPA) recommended the removal of Mrs Dapaah and Finance Minister Ken Ofori-Atta for poor performance.

ASEPA published a list of the top 10 best-performing and worst-performing ministers in the Akufo-Addo government.

According to ASEPA, responses from over 5,000 individuals across three regions of Ghana suggested that Mrs Dapaah was too weak to deal with the chronic filth that has engulfed the city of Accra.

Speaking on the matter for the first time, Mr Dapaah said indicated at a press briefing in Accra on Tuesday, 3 November 2019 that many Ghanaians do not appreciate the scope of her ministry’s work.

She, therefore, called on all persons seeking to assess her work to consider some of the gains made over the years, including a $100 million deal she got from Budapest recently.

“I had the honour of representing Ghana and His Excellency the President in Budapest, and through the good leadership being provided by His Excellency the indefatigable president, I was able to negotiate for $100 million for Ghana to use in the wastewater treatment sector.

“If I wasn’t a deliverer, I wouldn’t have even appealed to anybody or any country for us to have that. And for your information, again, the private sector had $30 million of that amount on the back of their own accounts and that private sector entity is Zoomlion, Jospong Group of Companies. Myself and the ambassador, we were there for them to sign their MoUs and people should appreciate what is on the ground, and those of you who are researchers, analysts, should always make sure that their findings are thoroughly checked out to make us all be on one page.”

Mrs Dapaah emphasised her commitment to serve the nation. “I insist we are ever-prepared, humbly, to serve this nation; we will never renege on our duties.”