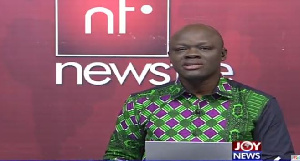 Samson Lardy Anyenini sits with his panelists to discuss issues that made headlines this week.

The spotlight will be put on claims by the opposition that President Akufo-Addo is running a ‘family and friends’ government. At a presser in Accra, Tuesday, the National Democratic Congress (NDC), through its National Communications Officer Sammy Gyamfi, presented names of persons it says are relatives and cronies within the Akufo-Addo government.

National Youth Organiser of the New Patriotic Party (NPP) Nana Boakye, in response said appointments of family and relatives into the Akufo-Addo government was made on the basis of competence but added that at least 33 names “have no real family ties” to the president.

The controversy surrounding the trail of ACP Benjamin Agordzo will also be featured as the embattled police officer who has been accused of supporting a coup plot to destabilise the country, has been charged with abetment of treason.

Also tabled for discussion is the Ghana National Petroleum Corporation (GNPC) justification of its huge expenditure on the swathe of Corporate Social Responsibility (CSR) programmes.

Watch the show below